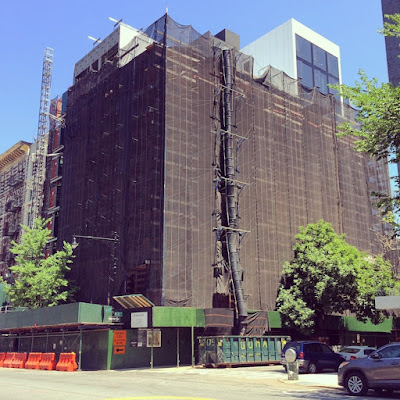 When 92 Morningside started the restoration process over a year ago, some strange additions had been presented on a rendering out front but now it looks like the penthouses are more minimalist in nature.  We like that the original facade has been restored and even upon closer inspection, one can see that the formerly missing cornice at top is now being added on.  This market rate development by 122nd Street with a direct view of Morningside Park will be one of the most notable residential buildings in the area once it all finishes up since the express trains are also only a couple of blocks away.  We have also been told that the entire interior which had been damaged by fire had to be gutted and rebuilt but the final results should show that the efforts were well worth it.  Check out what the building looked like in our past post: LINK
Posted by Ulysses at 8:55 AM