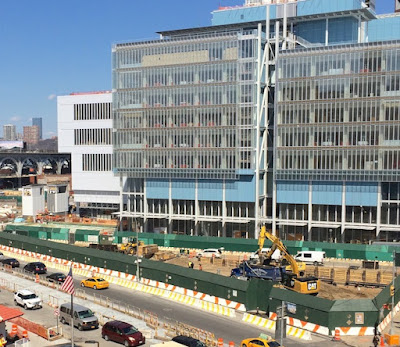 The commercial triangle on 125th and Broadway that used to house the old Floridita diner was demolished a couple of years back to make way for the Columbia Manhattanville campus but nothing has happened since then until recently.  We noticed diggers and foundation work starting up in the past week or so and new signage up on the plywood now reveals some dramatic architecture.  A first look of the new building can be found after the jump. 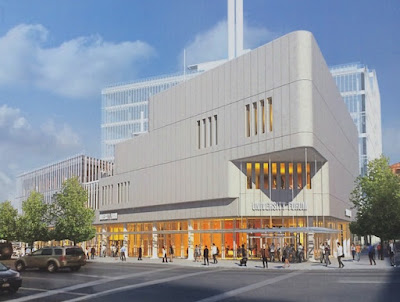 Previous renderings of the $7 billion campus have all been uninspiring glass cubes which reflect the architecture of the building that first arrived but this new 3-story corner piece has some strong sculptural merit. There is a lot more that has to happen on 17-acre site but if the future plans reinvent the neighborhood in a more modern fashion such as this new addition, then maybe uptowners will finally have some innovative architecture to be proud of.  A completion date of 2018 has been posted on the announcement and thus the final outcome will take some time to finish up for review.
Posted by Ulysses at 9:10 AM