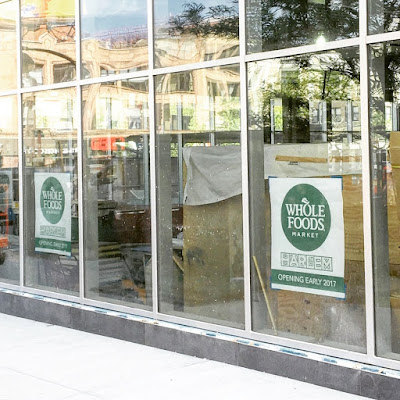 The facade at the new Whole Foods building at the corner of Lenox and 125th Street has pretty much finished up and now the notable anchor tenant has made an announcement.  Walking by the site this afternoon, we noticed several posters up on the ground floor stating that the opening will now be sometimes in early 2017.  Since things are moving along quite quickly now, this will probably mean sometimes January or February of next year so there will at least be another 7 months before all finishes up.  It is unclear if the other commercial tenants will be moving in prior to this date and more updates will probably be revealed in the coming weeks.  Check out the list of other commercial shops opening at the new address in our past post: LINK
Posted by Ulysses at 4:52 PM