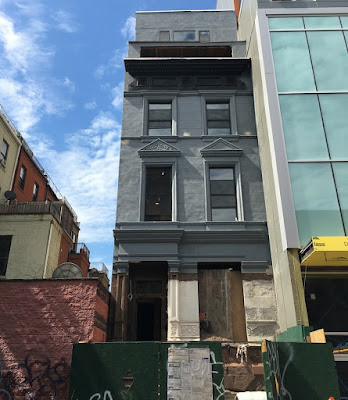 A Bespoke reader submitted a photo of 4 west 126th Street which had been a shell for many years but had scaffolding up out front for many months.  Renovations started over a year ago at the address just west of Fifth Avenue and most of the work had been concealed until now.  What has been revealed over the weekend is a fully restored original structure with gray tint as the color du jour and a penthouse of sorts added on top.  This SRO consisted originally of 11 units but has now been converted to 4 apartments according to DOB paperwork.  It is still unclear if these will either be rentals or condos but at least worst looking building on the block has been restored.

Check out the photo of the original facade in our past post: LINK
Posted by Ulysses at 9:33 AM