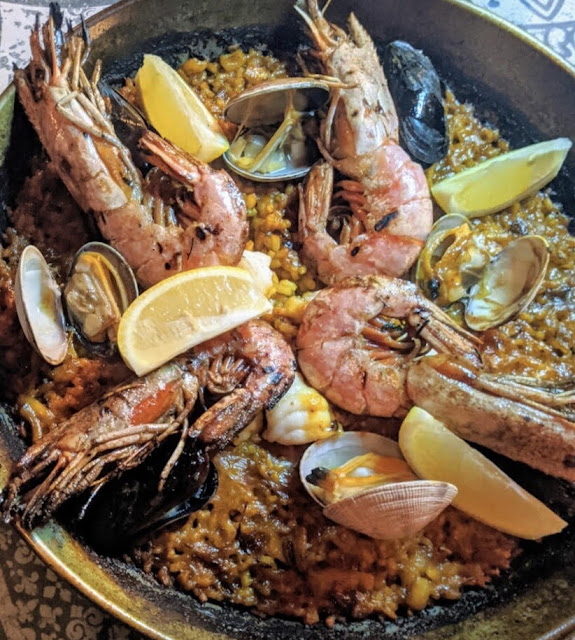 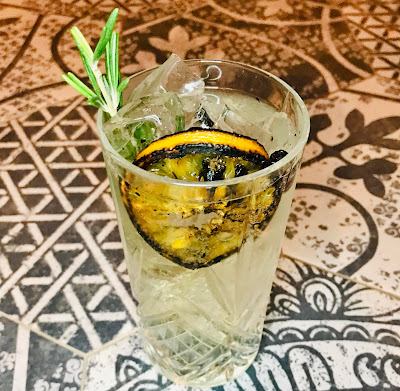 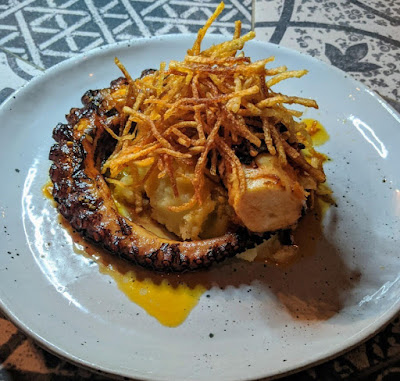 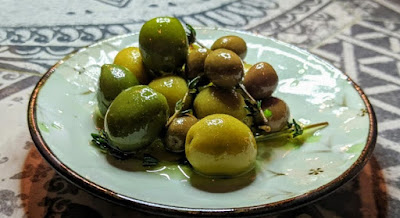 Harlem Bespoke:  A previous pop-up restaurant called Gaudir quietly made a formal, permanent debut last summer over at the former Mountain Bird space at 251 East 110th Street just west of 2nd Avenue and heralds the arrival of true Iberian tapas that will become the quintessential foodie destination spot in the new decade. Those familiar with the location will recognize one of the only restaurant fireplaces in the city still at the back seating area but there is also a much warmer ambiance with decorative tiles at each of the tables as can be seen in the above photos. The townhouse space is actually part of Tasting Tables which has helped new startups in the past such a Mountain Bird to establish themselves and the brick walls along with the exposed ceiling rafters packs in in a lot of ambiance.

Chef Cedric Durand grew up in France and Spain which in turn has tempered the craft of one of the city's newest culinary talents to look out for in food and drink.  A bottle of Flocs which is a superb dry sparkling cava started out the dining experience along with cocktails such as a wonderful gin & tonic with charred lemon, rosemary & coriander for $12 which is one of the better prices we have seen around for this level of mixology.  Even the starter olives that came out looked like work of art but that was just the beginning of the night. 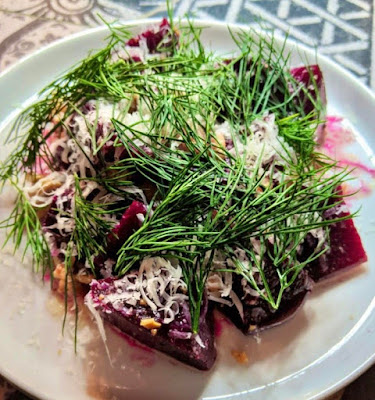 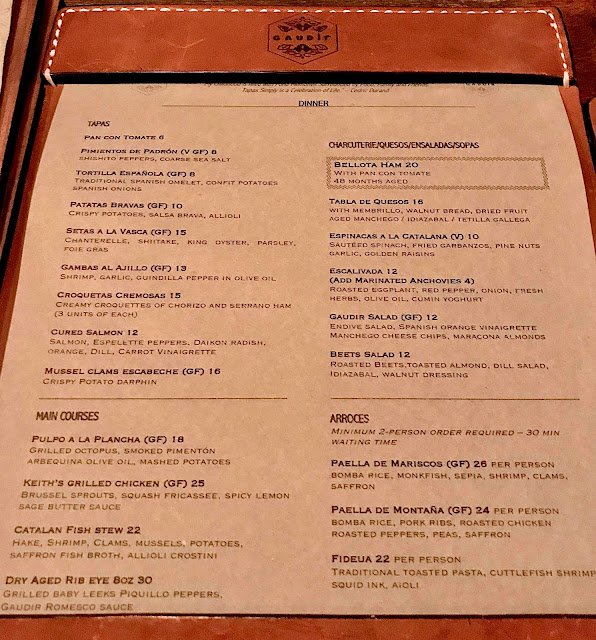 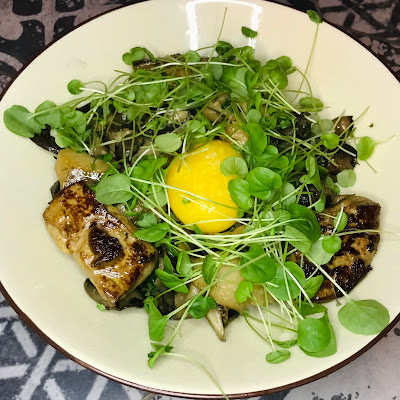 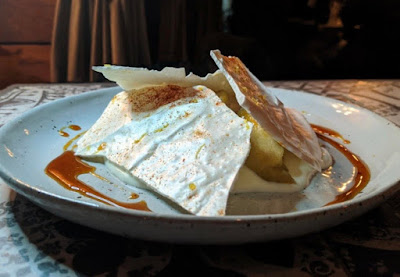 One of the first small plates to arrive in the evening was the Setas A La Vascas which was a mix of chantarelle, shitake, and king oyster mushrooms with decadent seared fois gras topped with an egg yolk along with a glorious sprinkle of micro greens.  This sensational presentation really set the tone for the dinner and was absolutely one of best dishes we have had in the past decade.  Then a colorful roasted beet salad with Idiazaba cheese and dill was a refreshing palate cleanser before some of the larger portions arrived soon after.  Exquisite fresh octopus from Gallacia was almost too beautiful to eat with potatoes two ways as an accent along with artisan Arbequina olive oil and smoke pimenton.   We have had some great seafood in the past but this is hands down the most tender octopus that we have tasted since starting to review restaurants years ago.

Paella is what Spanish food is really known for and Gaudir is king of this iconic dish.  We had the Paella De Mariscos with gigantic prawns, bomba rice, saffron, shrimp, mussel, clams and just a touch of sepia to add some incredible flavors that are stellar standouts. There was also the requisite crust on the bottom that added a little crunch to each serving and uptown foodies should definitely make a point of trying this dish out at least once in a lifetime.  A Paella De Montana with pork ribs & chicken and a seafood Fidua with toasted pasta are also two other offerings that will be a future discovery at our next time out at the eatery.

We have said in the past that we are not really dessert lovers but do enjoy when it is well done and Gaudir has some exceptional treats. Churros with remarkable dark chocolate was an easy classic choice for the end of the meal but the Goat Cheese & Roasted Apple was just extraordinarily sublime.  This sweet goat cheese cream confection with sheets of crispy meringue is basically a deconstructed baked Alaska with cool and warm texture coming together but with a zing from fresh lime zest which put our palate into orbit.

Book a reservation by contacting Gaudir on their website at Tasting Table or go through Resy and Open Table. For those who want the full experience, check out the Monday wine pairing tasting menu set at $120 per person on January 27th and call up to book a spot: LINK