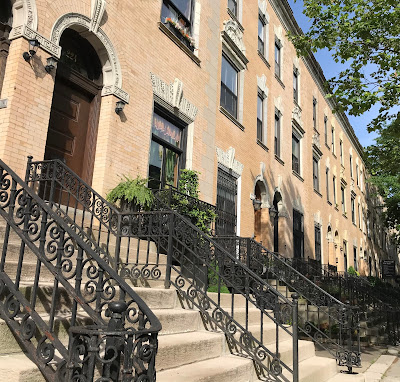 HarlemBespoke: Number 234 West 139th Street had an initial asking of $3.495 million in September of last year, was then reduced to $3.295 million by October 2019 and in April of this year had a price chop set at $3.095 million and now has a contract out as of this week.  Those looking for a single-family layout in brand new condition will want to check out this landmark townhouse by 7th Avenue but original detail seekers might be a little underwhelmed.
There are also the garages out back that are big attraction on the historic Central Harlem block and the commercial corridors on the avenues have really started to pick up in the past few years.  New York Time's favorite local restaurant is also around the corner and a celebrity chef debuted a tasting table eatery in the area at the end of last summer.  Another point to note is that similar house just a few doors down closed for over a million more this past February.   More photos and details can be found on Streeteasy: LINK