Harlem Bespoke:  Who can guess this Harlem corner from a city tax photo taken in the 1940s?  Some major clues to look out for is the old-school subway kiosk in front of the building which indicates a main intersection and the also low-evel building at the corner with a famous restaurant that was still around up until the 1970s or so.  There is also a notable liquor store marquee to the far left which was actually still up until 2005 but the city had the signage removed for safety issues.  We will have an answer up over the weekend so stay tuned. 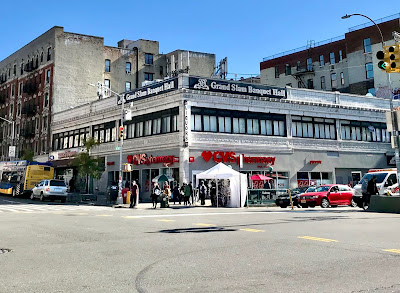 A lot of great guesses since a couple of low-level retail buildings on Lenox by the subway station fit the bill but this is actually 145th Street by the corner of Broadway.  The diner in question that had been at this corner for many decades since the 1940s was Bickford's Coffee Shop and some of folks who have lived in the neighborhood since the 70s had pointed this out. Brand's Liquor Store is actually still around these days and is considered one of the best spots in the neighborhood for great prices.  Check out the rare photo of Bickford's on 145th Street in our past post and learn more about this chain that once was popular in the city: LINK