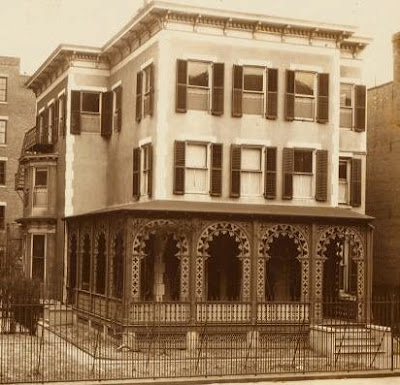 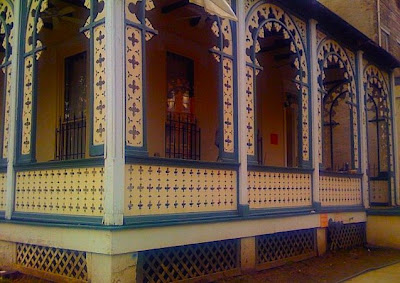 Built in 1863 as a gabled woodframe house, the picturesque villa at 12 West 129th Street has made some dramatic changes over the years. As a country estate built by two carpenters, the original clapboard design was more colonial than exotic, and it would be the subsequent owners that would bring an artistic eye to the property. Piano businessman John B. Simpson Jr. would add the porch in 1882 and have the moorish wood-cut fretwork added to the arches supporting the new structure. By the turn of the century, the house was purchased by a couple of religious institutions that added stucco over the clapboard and flattened the gabled roof. The house received landmark status in the early 1990's and is currently a youth hostel called Jazz on the Villa. 12 West 129th Street between 5th Avenue and Malcolm X (6th Avenue). Take the 2,3 train to 125th Street. Archival photo courtesy NYPL
Posted by Ulysses at 11:44 AM