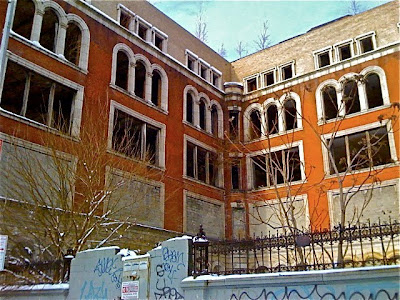 Should P.S. 186, the turn-of-the-century classical Italianate-style building on 145th Street, receive landmark status and be protected from demolition? A special committee within Community Board 9 met last night to determine if they would make such a recommendation to the New York City Landmarks Commission, who would ultimately need to review and approve such a designation. According to a Manhattanville resident who took notes for us, this local deliberation attracted a strong and interested crowd, with latecomers standing along the walls and the hallways of the small rented room in the penthouse of the Broadway Houses at 583 Riverside Drive. Notable attendees included Paimaan Lodhi, the urban planner from Manhattan Borough President Scott Stringer's office, as well as the unexpected arrival of renowned Harlem historian Michael Henry Adams. Committee Chair Walter South presented a convincing case when articulating the significance of the structure, designed by noted Superintendent of School Buildings C.B.J. Snyder. Yet several in the room questioned whether protecting P.S. 186 via landmark status would save it from the bulldozers of the politically connected Mannie Wilson Boys and Girls Club, a community group that currently controls the building and has plans to demolish it to make way for income-generating residential units. Attendees of last night's meeting raised eyebrows about the club's intentions, given that the group failed to live up to its pledge to the city to restore the building within the three years of purchasing it. One frustrated Hamilton Heights resident mentioned that he has lived around the corner from the school for over 30 years and has not once known a boy or girl ever attend or benefit from said Boys and Girls Club, wondering aloud if the group's sentimental stated purpose of serving children was merely a facade. In the end, CB9 voted 8 to 1 in favor of preservation, with all voting community members in attendance raising their hands in unanimous agreement. Read more about the 23 year battle to save this 107 year old historic site: LINK. Photo by Ulysses
Posted by Ulysses at 8:20 AM