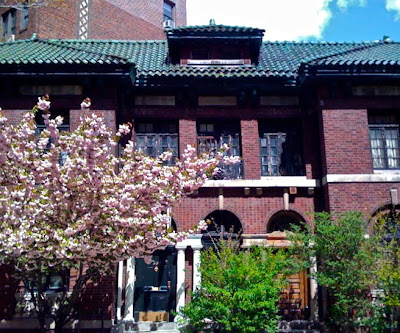 When the 39 foot wide, semi-detached Spanish style, prewar house at 809 Riverside Drive was up on the market last September, the asking price was almost at $2 million. Now, almost 7 months later, the price has been reduced multiple times until a couple of weeks ago, it reached it's lowest at $1.1 million. The landmark property is in the new Audubon Park Historic District at 157th Street which is just right outside the outer edge of Harlem's northern borders. There's not much going on in this part of town since the retail in the surrounding area is pretty limited, but the 1 train at 157th Street is only a block away. Transportation-wise, the train might be a moot point since there's a garage that is built into the side of the building. The house has all of its original details, six bedrooms, three baths and probably needs some work done on it to update the infrastructure. See our past post for a look at the interior and the garages: LINK. Photo by Ulysses
Posted by Ulysses at 2:57 PM