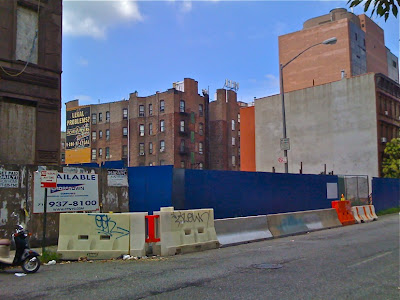 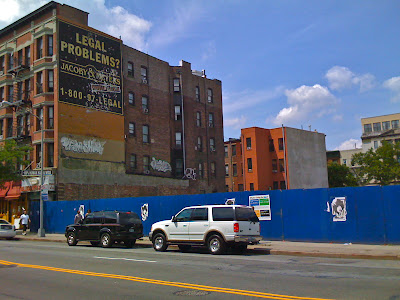 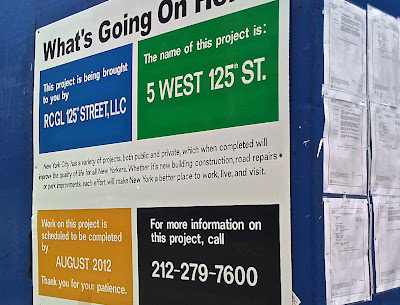 Some public records have now shown that 18 West 126th Street sold for $15,856,480 back in the middle of April and one might wonder what was the high selling price all about? This is actually the vacant land that faces 126th Street (top photo) and connects to 5 West 125th Street (middle photo), the huge open parcel that is just west of 5th Avenue. We mentioned that some official NYC signs recently went up on the site stating the project finish date would be around 2012 and those have now been updated more specifically to August 2012 (last photo).
The company 125 Property Interests LLC, an affiliate of Reisman Property Interests, LLC, had planned a luxury hotel back in 2007 and was seeking bond financing for the hotel project as late as last October: LINK. Also based on a reader's research, another option by the Feil Organization has a five-story building with retail and office space listed on their site for the lot: LINK. We are no experts, but for the price paid for the land, it would seem building the taller hotel would make more sense and some bonds must have been made available recently to allow the sale in April to go through. With such a big transaction, surprisingly little information seems to be out there. Anyone heard any new news? All photos by Ulysses.
Posted by Ulysses at 12:30 PM