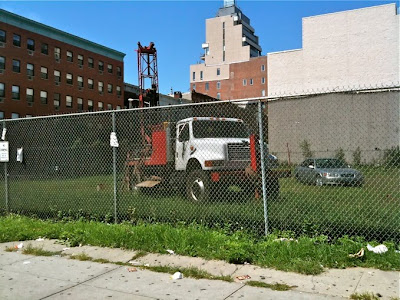 A reader mentioned they saw some activity on the corner lot at 125th Street and Lenox Avenue this morning so we decided to take a look at the future home of the proposed Harlem Hyatt. Folks might remember that back in early June, the city's Economic Development Corporation voted to proceed with "$19.7 million in Recovery Zone Facility Bonds to assist in the development and construction of an approximately 100,000-square-foot hotel on a 32,500-square-foot vacant parcel of land located at 100 West 125th Street in Harlem." Based on the press release, the goal was to have ground breaking within 2010 and the project finished by 2012. More specifically, September was given as the exact timeline for things to start happening.
As far as what went on today, it doesn't seem like anything major since work permits are not up on the DOB site for 100 West 125th (AKA 293-297 Lenox). There was a car, a small truck and the larger one seen in the photo (which was connected to a narrow hose leading into the sidewalk). The crew is digging around currently on the grounds but nothing is happening that apparently requires a permit. Emmitt Smith's $80.6 million hotel would be a great boon to the 125th Street corridor but many are hesitant to believe that it will happen until the structure actually starts rising. Read the official press release from June: LINK. See what Harlem had to say in our original post on the announcement: LINK.
Posted by Ulysses at 1:08 PM