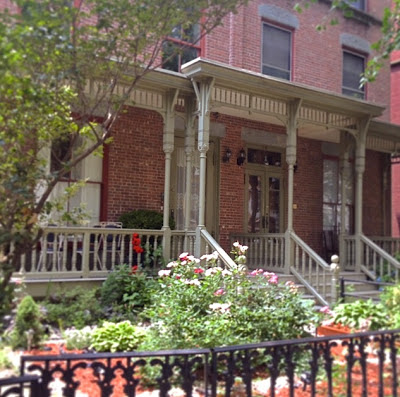 A rare historic Astor Row house is up on the market now for a record $2.5 million asking price so we are taking a closer look at the block that has a lot of potential but still is a little rough around the edges.  Astor Row is an official landmark block between Fifth Avenue and Lenox Avenue that was founded by the Astors of New York City.  All the houses on the south side of the street are identical with matching porches and were built in the 19th century.  The location is decent since it is right by Lenox Avenue's restaurant row and close enough to the retail at 125th Street along with being in easy reach of the express train.  With that said, the block still is in a state of upgrade with a handful of houses in need of restoration and few shells or abandoned lots populate the north side.

As far as price point is concerned, one might expect a little more detail happening inside for a renovated  Harlem home in $2.5 million range.  The last time an Astor Row home had a change of ownership was back in 2010 when one of the houses in need of renovation sold for $975K.    A townhouse not on Astor Row but close by on Fifth Avenue sold for slightly over $2 million back in 2011 and another Fifth Avenue house in the area is under contract now for the $3 million price point.

The big difference with these record properties and the Astor Row property is that even though they have been upgraded throughout, the original details still shine within.  Astor Row should be able to command a $2 million price point but buyers at this range tend to want upgraded finishes along with some sort of historic restoration or contextual design within the interior.  After looking at the interior renovations of this current property, we kind of wished a good kitchen designer was involved or that some moldings or woodwork could have been added back in the formal areas.  More details on this home can be found on Streeteasy: LINK
Posted by Ulysses at 3:25 PM