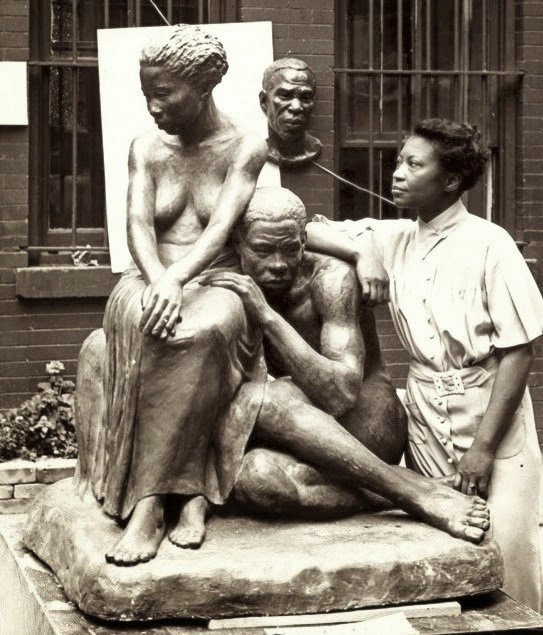 Photo courtesy the Archives of American Art at the Smithsonian

For Black History Month, HB will re-publish some of the archival history posts that are now half a decade old themselves. Many of the Harlem Renaissance figures are noted for their accomplishments by historians but little has been preserved uptown to mark the places they lived in or established during those remarkable decades.

Lost in the musical acclaim of the golden years of Harlem, one will find an extraordinary sculptor, Augusta Savage. Augusta Christine Fells was born in 1892, and the young Floridian would display her talents in childhood by sculpting small statues of animals. Savage's religious father was fearful of this since he associated these works with biblically forbidden "graven images" and would beat her when he discovered them. Ironically, he changed his mind in later years when Augusta actually sculpted a religious statue of the Virgin Mary for a local church. By the time she graduated high school, she was married, widowed, had one child and was highly recognized locally for her talent.

By 1921, Savage had saved enough money from selling her work to move to New York City and attend classes at Cooper Union. It was during this time she married once more and changed her last name to Savage, which she would keep even though the marriage did not last. By the 1930's, Savage's family fled a hurricane-ravaged Florida to live with Augusta in Harlem on West 137th Street. In these years, Savage would provide for her family and start a free school for artists in Harlem that would have over 1,500 students. While her two galleries were popular, low sales prompted Savage to close up shop eventually and spend her last days on a farm in upstate New York. Today, only a few prominent pieces of her work can be found because few of the original collectors have come forth. Her most famous bust, Gamin, is on display at the Smithsonian American Art Museum in the nation's capital.
HarlemBespoke.com 2021
Posted by Ulysses at 4:17 PM