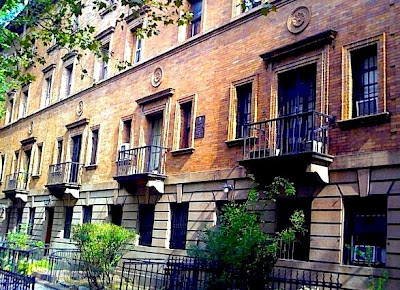 The Eubie Blake house on Strivers' Row sold for under $2 million earlier this year, and buyers will have another chance at deals on the neighborhood this fall. The orange brick townhouse at 261 West 139th Street is on the north side of the famous luxury enclave built in the 19th century. This one is fully renovated in a modern but somewhat bland fashion. At the asking price of $1.675 million, it's double the cost of a townhouse on the same block (which needed work) that was sold in May at the the bottom of the market for $699K asking. Location wise, this is Central Harlem, between FDB/8th Avenue and ACP/7th Avenue, and is one of the most prestigious addresses in Harlem. Amenities in the area are still slowly coming along, but some boutiques have been opening on the avenues in the past few years. The closest subway is the B,C at St. Nicholas. Read more about Strivers' Row in our previous post: LINK
Posted by Ulysses at 8:45 AM