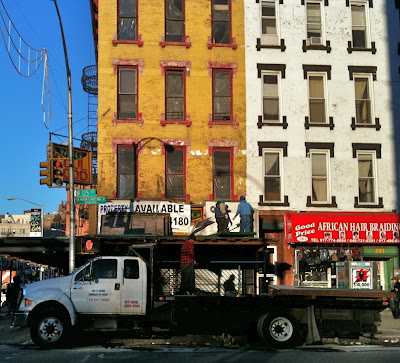 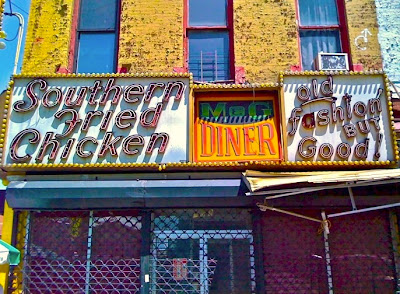 We noticed that construction had started on the old M & G Diner site at 383 West 125th Street yesterday.  The old school diner at the corner of Morningside Avenue was rumored to have been bought out a couple of years back and the building was to turn into some sort of residential development.  After the housing market froze in 2009, not much seemed to have happened until now.  Sidewalk sheds went up in the morning yesterday and we were afraid that the iconic signs were being dismantled.  From what we saw during last night's early evening hours, the workers look like they were covering the signs with some sort of white protective siding (updated photos should arrive later today).  A big trend downtown is to open a new space but keep the original signage of the stores facade so let's hope this is the course of action (check out the images of the J. Crew Liquor Store in Tribeca): LINK. DOB records show work permits for a building renovation along with the storefronts so we will have to see what it's all about in the upcoming weeks.  Get more details on the building lease in our October post: LINK
Posted by Ulysses at 12:45 PM